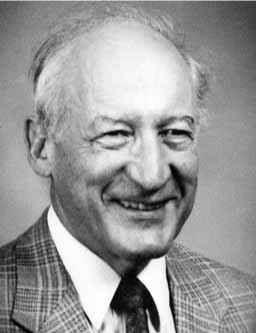 Jacob Eugene “Jack” Gair, 75, an internationally known economic geologist who retired from the U.S. Geological Survey in 1987, died of cancer at his home in Kensington, Maryland, on January 1, 1998. Jack was widely recognized for his research on iron deposits in the Upper Peninsula of Michigan and in Brazil, and on volcanogenic massive sulfide deposits of the central and southern Appalachian Mountains region.

Jack was born in Pittsfield, Massachusetts, and grew up in Lee, Massachusetts, where he was active in the Boy Scouts, attaining the rank of Eagle Scout. He served as a B-24 pilot in the 8th Army Air Force in England during World War II, flying 33 combat missions. Before and after the war, he attended the University of Rochester, where he played on the football team and was a member of Delta Upsilon Fraternity. Jack received a B.A. degree in geology and English from the University of Rochester in 1946 and was elected to membership in Phi Beta Kappa, the national honor society. He earned a Ph.D. degree in geology from The Johns Hopkins University in 1949.

Jack taught geology at the University of Oregon from 1949 to 1952. He joined the USGS in 1952, devoting the ensuing 35 years of his career to studies of domestic and global mineral resources. Jack’s first Survey work was in a USGS field office in Iron Mountain, Michigan, where he studied iron deposits of the Upper Peninsula. From 1954 to 1956 he lived in Belo Horizonte, Brazil, undertaking geologic studies of iron deposits in the Itabira district and training Brazilian geologists in field and laboratory methods. From 1957 to 1968 he worked out of USGS offices in Denver and Marquette (Michigan), where he continued research on iron deposits of the Marquette and Iron Mountain districts in northern Michigan. Jack moved to the Washington, D.C., area in 1968. He appraised iron resources in Turkey in 1969, and during the 1970s investigated tungsten deposits in the Hamme district of North Carolina. From 1971 to 1973 he served as Deputy Assistant Chief Geologist and Acting Chief of the Office of Mineral Resources of the USGS. During the 1970s and 1980s he evaluated the potential for mineral resources on Native American lands in the eastern and southern United States, in several Wilderness Areas in Georgia and Tennessee, and in the Charlotte (North and South Carolina) 1° × 2° quadrangle. In 1975 Jack began studies of volcanogenic massive sulfide deposits of the Appalachian Mountains region, chiefly in the Mineral and Gossan Lead districts of Virginia, and in the Ducktown district of southeastern Tennessee; he continued these studies until his retirement. In 1979 he assessed copper deposits in Egypt. From 1976 until 1984 he served as U.S. representative to the highly successful IGCP Project 60 on massive sulfide deposits of the Appalachian-Caledonian orogen.

Jack was the author of nearly 100 scientific papers, maps, and abstracts, an editor of several volumes, a Fellow of both the Geological Society of America and the Society of Economic